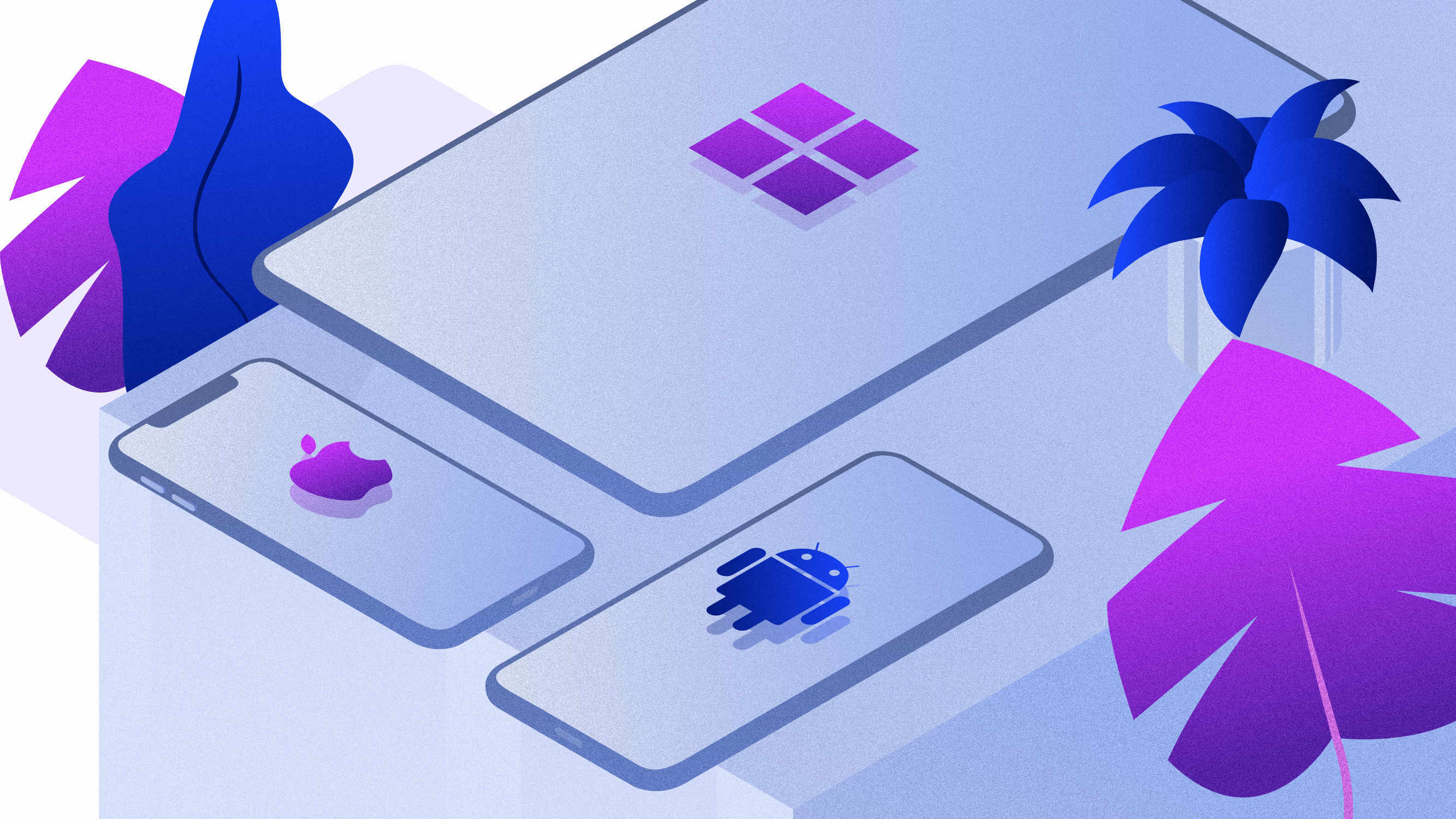 What is Mobile Development?

In the smartphone era, people bring their portable devices everywhere with them, depending on and putting many everyday life informations, such as appointments or groceries lists in them. Whether it is a phone or a tablet, you will always find a mobile app on it, helping someone manage their schedule, improve their productiveness or entertain them. All thanks to one of the software development’s division – mobile development. It allows to create a specific app to fit your expectations. There are few types of it, as well as platforms that apps operate on. Determined by your target audience’s needs and app characteristics, you are able to pick the best technique for your product.

Platforms – How to Build an App?

Platform is a mobile’s operating system (OS), which manages all fuctions of the device. It means that for every different system, you will need to build your app seperate ways. Mobile OSs are usually made basing on some sort of computer OS already exsisting and modified to fit mobile style. Game winning platorms are Android and iOS. Android holds over 80% of smartphone market share, while iOS has more than 60% of tablet market share.

Android – „The best of your apps, even faster”

Android is owned by Google and has been produced basing on Linux OS. One of the differences between the computer version and the mobile one, is that the mobile one does not contain some of the libraries or servers compared to the computer one. That leads you to, for example, not being able to open certain graphics or whole apps on one of the devices, even though it works on the other. Despite PC’s OS being a fundmanet for mobile OS, they are in fact two distinct creations. One thing to note about this platform, is that it is open, in a sense that it runs on devices made by various companies, not just their owner’s, Google. That distinguishes Android from iOS. You can learn about creating apps for Android on their website, with a handful of information for developers. Their guide is beginner friendly.

iOS – „Deliver the next generation of apps”

Owned by Apple and has been developed with Mac OS. As already mentioned, iOS runs only on Apple devices. It works with Apple’s hardware and nothing else. Compared to that, with Android’s Open Source Project, anyone has a platform’s code available to modify under a license and run on their own hardware. However both of these approaches have their benefits. Google gets more devices and content that bring them more users in, and Apple has way more control over both hardware and software that keep their product consistent and safer, because they have full control over what apps end up on the screen and in the App Store. Apple helps app architects with building their concept with instructions and documentation on their website. They also have a forum on which you can discuss problems with Apple’s developers.

There are many types of apps for you to choose from, each one is built differently, will perform in certain ways and will vary in the amount of time needed to produce it. Obviously, every single one has it’s advantages and disadvantages, so should be picked according to your expectations and be a best solution to it’s purpose. Mobile development world has tools for you to work with, use them wisely. Before you choose a tactic, you should know what it is that you want to achieve with your app. With clear goals, and made up mind about which parts of market you are targeting, you will save yourself some time and money, putting efforts into creating your app with the right model.

The word native speaks for itself. Those apps are talking in the same language as the software they are built for, meaning that one and the other are written in the one same code. For Android it is Java code and for iOS it is Objective C or Swift. Swift for example tends to be faster to load than Java, but Java does the job on Windows, Linux and Mac as well. Because the app is written in the specified code it will fit only the right device. Pre-installed apps like messages, calendar or photo are the native ones. When you are creating a native app and you want it to perform on different platforms, you will need just as many codes written.

Complexity of the hybrid app desintegrates into a native app and a web app. Web app is a program that uses a browser to run. The difference between it and a regular web page, is that it shows alike functionality to a normal app. Hybrid app adapts native one as framework to put a web app into. So basically in your downloaded native-like app, you have a mini web restricted to app’s purpose, shown to your client as a webview. Using a web gives you advantage in mobile development for it works across all platforms because they are written in HTLM5, JavaScript and CSS or other web technologies.

Which Way To Go: Native or Hybrid?

Whether you decide to have your app be a native app or a hybrid app, you will benefit and lose in distinct areas. Analyze their strenghts and weaknesses carefuly to understand which option applies to most important pieces of your product better. With native path you have to put more time, money and efforts to realize your project, but you will get a well controlled product designed specifically to run smoothly on all chosen devices. With hybrid approach you get to easily access all platforms while saving extra time and money, but you are more likely to face problems with app’s performance.

Because the app is written in the same language that the platform, app adjusts to it, in a way it works similar to the platform, making your costumer’s experience easier and better. You can bring your app design to perfection and have it operate without trouble. Convenience of the same code keeps things consistent and give people a feeling of integrity of elements. Having known the platform, user also already gets a glimpse of how to navigate themselves around the app.

End users not technologies shape the market. Consequently, marketers need to stay abreast not only of technological developments but also of the way people respond to them. – David Murphy, Founder and Editor of Mobile Marketing Daily

Same code equals processing way faster. All the time you will have spent on creating a native app is an investment into future updates, because they will be supported by already existing platform.

Native mobile development allows your app to use all device’s functions, collecting data and viewing all databases. It will let you have more control over what your product can and can not do. Aswell, you will be able to protect your client’s information better.

There is a chance that you want to have your product available for all platforms. That means you have to write multiple codes and hire more team members. Even if that is not the case, native development’s cost is usually higher than hybrid development’s.

With a picked language and platform that goes along with it, you are restricted by it in a way. In order to, for example, appear in an App Store, your app will need to be reviewed and judged upon if it is good for Apple’s vision.

If you wish to target many platforms at the same time, you will be able to do it with hybrid mobile development in one go, bringing your product faster to the market. When you want to put something new into your app, you will not have to code it few times for each platform, but just once.

One solution will cost you less and will be generated way faster than few seperate codes. On top of that, maintenance of a hybrid app is cheaper.

Hybrid app can take advantage of hardware’s functions only thanks to plug-ins. It is an additional work to create them and also they have to be kept updated to the software at all times for them to work.

The performance of the hybrid app will depend on Internet connection to provide all functions. Any issues with it can make the app useless. It is hard to estimate and optimalize how it will work offline.

MVP stands for Minimum Viable Product. It is a version of your app that would contain only some of intended functions, the most important ones. It is a good chance to get feedback on your product and see if it is worth investing in. Hybrid mobile development can be a quick fix in order to achieve that or even the test to check if you should make a native version. After users start engaging in your prototype, you may slowly add more to the app and have it grow along with your audience. It also benefits you in a way that you can watch the product arising closely and easily identify what works and what does not. Of course as dreamy as it sounds, it is not a easy task. It can be difficult to pick appropriate functions to represent your pre-version of the product. You can always learn by history examples. One of the apps that started as a MVP is Uber.

In the User’s Hand

Your costumer’s comfort and satisfaction should be top priority. They are the one who hold their devices to make their lives better with the help of your app. Draw conclusions from strategies and pick one that fits your vision. Mobile development is an industry that keeps on growing, it is full of chances to take. It also is a great way to start in the software business for it’s relatively short production time mixed with high efficiency. As Thomas Husson, the Vice President at Forrester, says:

Mobile is becoming not only the new digital hub, but also the bridge to the physical world. That’s why mobile will affect more than just your digital operations — it will transform your entire business.

Website Optimization Tips: How to improve your website’s performance?

Who is a Software Architect?

Marketplace Masterclass #2: How To Design & Develop A Marketplace?

PHP vs Node.js – Which One to Choose for Your Backend?

What Is the React.js Framework? When and Why Should I Use React.js in My Project?

How To Define An MVP Properly?