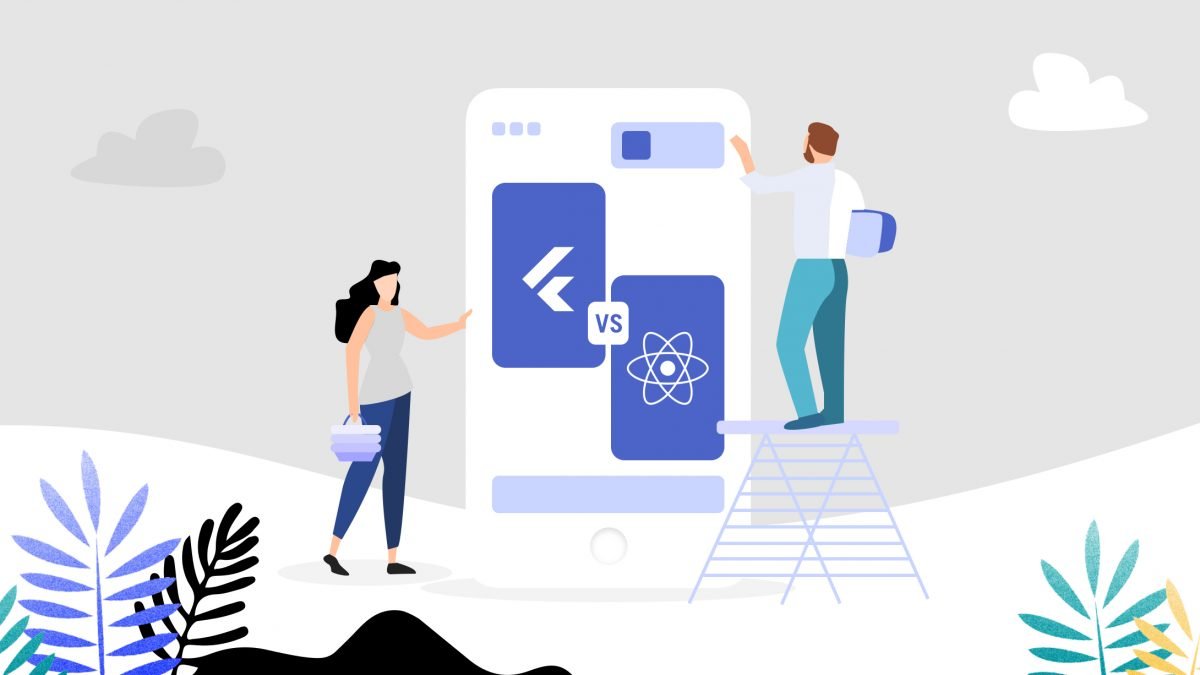 In one of our previous articles we’ve covered the Flutter pros and cons as well as typical use cases and best use scenarios. However, Flutter is not the only option out there for cross-platform development. Before Flutter, the most popular one was React Native. And it’s still very popular today. So, what makes them different and when should you use Flutter or React?

Before we get into details about the pros and cons of each framework, let’s take a look at their basic information. Flutter was first officially released in 2018, while React Native had its debut in 2015. Both of those are open source and free to use. Flutter is supported by Google and React Native is supported by Facebook. There’s also another significant difference: Flutter uses Dart as its programming language, while React uses JavaScript. This is something that will come into play when it comes to comparing the two. We’re also going to include our Developers’ perspective on the matter as they have experience working with both technologies and might shed some light on what it’s like actually using them in the project and what are Flutter’s and React’s practical advantages.

To get a comprehensive overview of both technologies, let’s break them down in a few different categories. Some of the important things to consider when deciding on your tech stack are the time needed to develop an MVP, the overall time-to-market, the performance, the ease of working with the technology, the learning curve and the supporting community as well as the libraries and resources available.

Flutter uses Dart as its programming language, while React uses JavaScript. This clearly gives React an advantage when it comes to the learning curve. Most developers are already familiar with JavaScript, so using React Native will be a much easier experience for them. Flutter requires its users to know Dart which is much less popular than JavaScript and, therefore, makes the learning curve a bit more steep. When it comes to the supporting community, both technologies are backed by big corporations and are popular among developers. However, as of 2019 according to StackOverflow, Flutter is much more popular, despite being a few years younger than React. Also, both technologies have similar interest in them on GitHub which is very impressive as Flutter only officially came out two years ago.

The next big area to compare is how fast you can deliver MVPs and complete applications in Flutter and React. After all, many businesses need to act fast and have significant deadlines. When it comes to the speed of development, Flutter and React are similar. However, React Native uses bridge and native elements, so it may require separate optimization for each platform. This means that the time-to-market may be longer with React. Of course, it’s also dependent on your team and their skills and proficiency in a certain technology. But generally, especially if you need a quickly-delivered MVP, Flutter would be the winner here. Both technologies also have a very important feature called Hot Reload which basically enables the developers to see the changes they made in the code almost instantly in the app. This cuts down on the amount of testing needed, therefore making the whole development process quicker.

Generally speaking, Flutter apps perform better than React Native ones. That’s because React uses a JavaScript bridge to compile the code and interact with native components. Flutter doesn’t have that bridge and the Dart code is directly compiled to native code which makes its performance better. But that’s just a technical judgement. The performance doesn’t only come down to how fast or smooth the app is. Of course that’s very important, but the way the UI works and how nice you can make it also comes into play.

Both technologies use “blocks” for creating the UIs. In Flutter they’re called widgets and in React they’re called components. Flutter is considered to make it easier to develop native-like apps because it provides the Google’s Material Design and Apple’s iOS native elements from the get go. It also has an additional advantage: an app made with Flutter will look just as good on a new operating system as it would on an older version. This is something that you can’t achieve with React Native without using third-party libraries. Flutter is also known for supporting very complex interfaces and making them work smoothly across all devices. This would be harder to do with React because of the JavaScript bridge.

The reason you’re here is because you’re looking to develop cross-platform and save time and money on native app development. So it’s important to compare how much a single codebase in Flutter and React can do for you. As of now, Flutter only offers developing apps for Android and iOS devices with web apps being available as a tech preview. It will probably released soon as a full-on feature, so that you can “kill three birds” with this one Flutter codebase. React currently offers Android and iOS development as well, however, it has additional libraries that enable you to develop for web and Windows too.

Get more case studies, tips and tech insights every month
Thank you for subscribing 🙂

When It’s Best To Use React And Flutter?

There’s no clear answer for every project whether you should use React or Flutter. It depends on many different, project-specific factors. It also greatly depends on the team you have. If you work with an in-house team, then you need to take into consideration their existing skills and expertise, however, if you’re looking to outsource your development, you’ll have more freedom concerning the choice of the tech stack.

When To Use Flutter

There are a few general cases when Flutter will be the better choice:

When To Use React Native

When it comes to React, there are also several situations will call for this technology rather than Flutter:

As with anything related to coding, it’s important to also take into account the team’s perspective and their experiences. We asked a few of our Mobile Developers to share their journey with Flutter and React as well as shed some light on what it’s like actually working with those technologies. Here’s what they had to say:

“As a mostly native developer before, I have worked with both Flutter and React and I have to say that I quickly hated React. Flutter is easier for me to grasp and work with. Although Flutter has over 7K active issues, I think it’s just much more fun to work with and provides better performance.”

“What I personally like about Flutter is that it’s much easier to work with. The amount of code you need to write to get the same result in Flutter vs. React is much shorter and the whole process gets much more fun because of it.”

If you’re looking for a team of experienced Developers to help you choose your tech stack and build your product, contact us for a Free Product Consultation!

Why Should You Outsource Your Product Development To An Agency?

Entire IT Team Outsourcing – Worth It Or Not?

How To Launch A Mobile App The Right Way

What Is Desk Research And How To Do It?